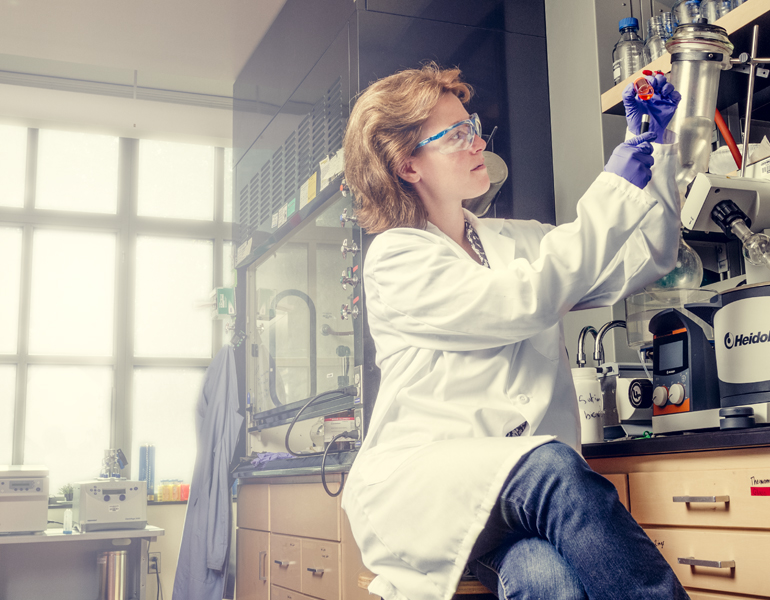 Scientists have spent decades searching for more efficient ways to harvest sunlight for energy. While costs are coming down, UW researchers are working on even more affordable alternatives that may speed the widespread adoption of clean energy technologies.

One option being explored by Brandi Cossairt, assistant professor of chemistry, is quantum dots—nanometer-sized crystalline semiconductor particles that can be spray-painted on a surface in layers. The chemistry used to make quantum dots is inherently self-purifying, translating to much lower costs than conventional solar cells, and because quantum dots can be tuned to absorb all colors of light, they are more efficient in harvesting energy from the sun.

Quantum dots can be used in applications ranging from solar cells to light-emitting diodes (LEDs) found in televisions and computer monitors. Though only recently implemented in photovoltaics, their efficiencies are rapidly approaching those of more expensive silicon-based devices. Their use for commercial solar energy harvesting and storage, however, will take longer to develop. “There’s a lot of science that has to happen before we’ll see sunlight used to make fuel on a commercial scale,” says Cossairt, who was awarded a Packard Fellowship and a UW Innovation Award for her research.

David Ginger, the Alvin L. and Verla R. Kwiram Endowed Professor of Chemistry and Washington Research Foundation Distinguished Scholar, also works on solar energy solutions. His lab’s recent projects include an imaging technique that can identify flaws in low-cost solar cells and can be used to study many new materials, from organic photovoltaics —plastic solar cells—to a family of materials called perovskites.

Both Ginger and Cossairt are members of the UW’s Clean Energy Institute, a state-funded campus-wide initiative.

“Focusing on using completely renewable resources that will never be exhausted just makes good logical sense,” says Cossairt. “If we can find a way to harvest and store energy that is cheap and efficient, it will be transformational.”

You can help ensure that the Department of Chemistry is able to attract and retain top researchers like Brandi Cossairt and David Ginger while fostering vital research to solve some of the world's urgent problems.
Give Now
You can support research and teaching programs in the College of Arts & Sciences where we pursue challenging questions, conjure big ideas, and work tirelessly to improve lives and contribute to the global good.
Give Now

Each week, about a dozen A&S students head to prison. They trek up to the Monroe Correctional Complex for a 400-level course about criminal justice,... END_OF_DOCUMENT_TOKEN_TO_BE_REPLACED

The origin of the Universe remains a mystery, inspiring creation stories and scientific theories. Soon astrophysicists will have a new tool in their search for... END_OF_DOCUMENT_TOKEN_TO_BE_REPLACED

After acquiring 29 fragments of ancient manuscripts on birch bark scrolls, the British Library turned to experts in the UW College of Arts & Sciences... END_OF_DOCUMENT_TOKEN_TO_BE_REPLACED

It’s 10 p.m. on a Thursday night.  Outside the UW Women’s Center, all is quiet. But inside the building, high school girls crowd around a... END_OF_DOCUMENT_TOKEN_TO_BE_REPLACED