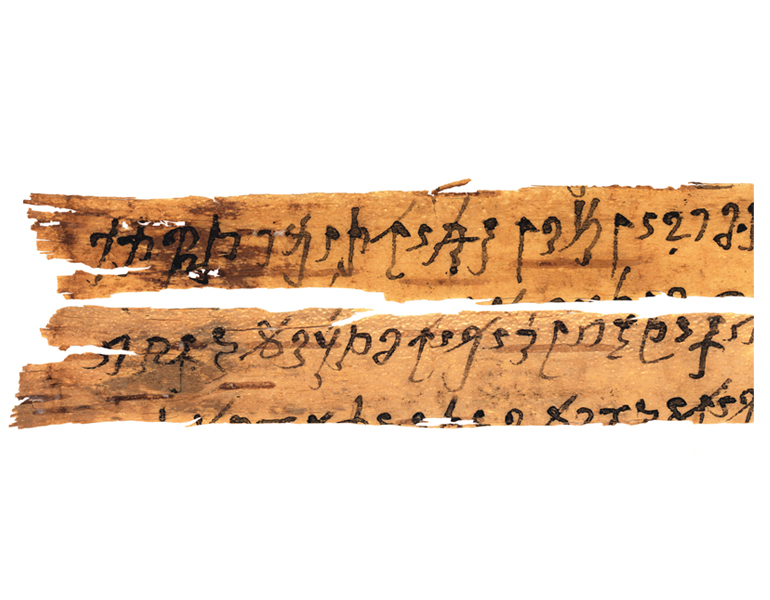 After acquiring 29 fragments of ancient manuscripts on birch bark scrolls, the British Library turned to experts in the UW College of Arts & Sciences to decode and study them. The manuscripts, which date from around the first century BCE, are the oldest surviving Buddhist manuscripts as well as the oldest manuscripts from South Asia.

The UW established the Early Buddhist Manuscripts Project in 1996, with Asian languages and literature professors Richard Salomon and Collett Cox leading a team that has studied the manuscripts ever since, with support from the Henry Luce Foundation, the Dhammachai International Research Institute, and other sources. While some of the manuscripts are related to texts in other languages, many have no parallels in previously known Buddhist literatures. More recently discovered manuscripts have expanded the project’s scope to more than 75 scrolls and hundreds of smaller fragments.

“The significance of these manuscripts for Buddhist studies is potentially comparable to that of the Dead Sea Scrolls for Judaism,” says Salomon, the William P. and Ruth Gerberding University Professor. “These texts represent a substantial portion of the long-lost Gandhari Buddhist canon.”

You can help expand collective knowledge of one of the world's largest religions by supporting the Early Buddhist Manuscripts Project.
Give Now
You can support research and teaching programs in the College of Arts & Sciences where we pursue challenging questions, conjure big ideas, and work tirelessly to improve lives and contribute to the global good.
Give Now

Each week, about a dozen A&S students head to prison. They trek up to the Monroe Correctional Complex for a 400-level course about criminal justice,... END_OF_DOCUMENT_TOKEN_TO_BE_REPLACED

Scientists have spent decades searching for more efficient ways to harvest sunlight for energy. While costs are coming down, UW researchers are working on even... END_OF_DOCUMENT_TOKEN_TO_BE_REPLACED

The origin of the Universe remains a mystery, inspiring creation stories and scientific theories. Soon astrophysicists will have a new tool in their search for... END_OF_DOCUMENT_TOKEN_TO_BE_REPLACED

It’s 10 p.m. on a Thursday night.  Outside the UW Women’s Center, all is quiet. But inside the building, high school girls crowd around a... END_OF_DOCUMENT_TOKEN_TO_BE_REPLACED