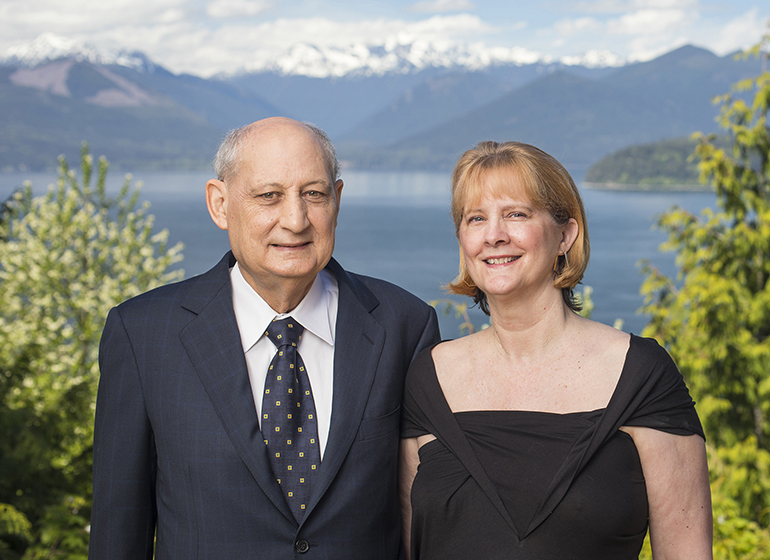 The next time you text a photo to a friend, download a massive data file, or use your car’s self-parking feature, give a nod to Larry Dalton, UW professor emeritus of chemistry. Materials developed by Dalton have radically increased the sensitivity and speed at which information is processed, with applications from medicine to telecommunications to autonomous vehicles. No wonder Dalton has amassed nearly two dozen awards and is an elected fellow in five major science and engineering societies.

It was thinking about future generations that led Dalton and his wife, Dr. Nicole Boand, to recently commit $12 million to the Department of Chemistry for faculty and postdoctoral support—the latest chapter in the couple’s long history of giving. Their previous gifts to the Chemistry Department include two endowed professorships, two endowed chairs, and support for graduate student fellowships and undergraduate assistantships.

Dalton got his start in chemistry at Michigan State University Honors College and then Harvard University, where he pursued his PhD research in the lab of Alvin Kwiram, now UW professor emeritus of chemistry and vice provost emeritus for research. “He could be found in the laboratory at all hours of the day and night, including weekends and holidays,” Kwiram recalled in a 2008 article about Dalton in the Journal of Physical Chemistry. “Indeed, he was the only student for whom I stipulated a mandatory vacation.... That intensity does not seem to have diminished over the years.”

Kwiram and Dalton have remained close friends and colleagues, both eventually joining the UW faculty. Dalton and collaborators made dramatic advances in optoelectronics, which high-tech manufacturer Lumera (now part of GigPeak) then licensed. The pioneering research also led to the establishment of the Center for Materials and Devices for Information Technology Research at the UW, funded through a ten year, $40 million National Science Foundation grant.

Despite the far-reaching impact of Dalton’s work, he knows that the next generation can do more. To encourage innovation, he and Boand have chosen to support faculty and postdoctoral students. “Nicole has always been a partner in these decisions,” says Dalton. “She served on the UW College of Arts & Sciences Advisory Board, and she truly understands what it takes for a university to be great.”

Part of the couple’s recent gift will be used to elevate their two endowed professorships to endowed chairs. Such endowments play a significant role in the hiring and retention of exceptional faculty. “Recruiting topnotch faculty is a goldmine,” Dalton says. “In addition to the tremendous impact that they have on students and the culture of the University, they bring in so much grant funding for student and infrastructure support that their hiring is an excellent financial investment.”

The gift will also fund Dalton Postdoctoral Fellowships in Chemistry. While most postdoctoral students are supported through faculty grants and therefore work for individual faculty, Dalton Fellows will have the freedom to pursue their own research. The majority of Dalton and Boand’s $12 million gift will be dedicated to these postdoctoral fellowships, funding several fellows each year.

Michael Heinekey, chair of the Department of Chemistry, is excited by the fellowship’s potential to attract top early-career chemists. “Only a handful of postdoctoral fellowships of this type are offered by U.S. chemistry departments, so they are highly coveted,” he says. “This will be huge for the department.” It’s a bold gift, made possible by a couple used to thinking big.

You can support the next generation of scientists and empower vital discoveries through a gift to the Chemistry Department.
Give Now
You can support Arts & Sciences faculty, empowering their work to elevate human knowledge, develop solutions to pressing problems, and drive innovation.
Give Now

As many as 50,000 African elephants—about 10 percent of the elephant population—are killed each year for their ivory, driving the iconic animals toward extinction. Sam... END_OF_DOCUMENT_TOKEN_TO_BE_REPLACED

The Sephardic Jewish community faces a cultural turning point. As the last generation of native Ladino (Judeo-Spanish) speakers leaves us, their language and literary history... END_OF_DOCUMENT_TOKEN_TO_BE_REPLACED

During El Salvador’s brutal civil war, more than 7 5,000 civilians were killed, mostly at the hands of the government and its paramilitary adjuncts.  Two... END_OF_DOCUMENT_TOKEN_TO_BE_REPLACED

Criminals are meant to pay their debts to society through sentencing, but a different type of court-imposed debt can tie them to the criminal justice... END_OF_DOCUMENT_TOKEN_TO_BE_REPLACED