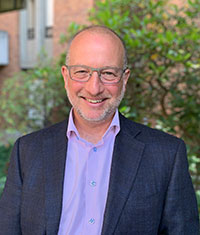 Daniel Pollack is a professor in the department of Mathematics. He previously served as the interim chair of the Department of Statistics and as chair of the Arts & Sciences College Council. Pollack's areas of research are differential geometry, mathematical general relativity and partial differential equations. In relativity, he has focused on the study of black holes and initial data for the Einstein equations. These equations lie at the foundation of general relativity, linking the geometry of spacetime with the matter and energy present in the universe.