Exploring the World in Translation

“Translation is not a matter of words only: it is a matter of making intelligible a whole culture.”
— British writer, composer, and translator Anthony Burgess

Books in translation offer a window into worlds otherwise unavailable to most of us. Translators face the difficult task of capturing the spirit of a writer’s work and the rhythm of the original language while making the work accessible to a broader audience. They do the hard work so we can enjoy masterpieces from across the globe.

Asked to share their favorite works in translation, ten faculty in the College of Arts and Sciences Humanities Division provided suggestions that cross continents and centuries. Get ready to travel the world through these compelling translated works.

The Adventures of Amir Hamza*

Come read the Game of Thrones of India. This 19th-century Urdu masterpiece draws on The Thousand and One Nights, Islamic folklore, and Persian epics to tell the story of Amir Hamza, the brave hero loosely based on the uncle of the Prophet Muhammad, and the trickster Amar Ayyar. The tale has travelled from Persia to South Asia and Indonesia, and features the magical realm of Qaf, home to fairies and monstrous devs. It’s here spectacularly translated by Farooqi, who captures both the ornate prose and the slapstick humor of the original.
*special abridged edition

If ever there were a time to read Camus’s The Plague, this is it. Although Gilbert’s translation falls short (a new translation will be published by Knopf in 2021), there is remarkable consolation to be found in this novel about a fictional pandemic in colonial Algeria. Camus stages the ethical dilemmas of responding to an outbreak without wholly resolving them; still, The Plague argues that we are all called upon to do what we can for the greater good. As one student in my Spring 2020 course pithily summed it up, “the effort is the hope.”

If ever there were a time to read Camus’s The Plague, this is it.

“Berlin descended on me like a comforter with a flaming floral design.” And so the reader is transported to the gritty, frenetic metropolis that embodied all of the glitz and intoxication of the Weimar Republic. In this text, later banned by the Nazis, 1930s Berlin is seen through the eyes of Keun’s “New Woman,” who is eager to embrace the sexual and economic freedoms advertised so tantalizingly in the media and big city, even though these freedoms seldom materialized. The intimate and confessional style of the novel, its commentary on consumer culture and vivid descriptions of the urban capital, help The Artificial Silk Girl to retain its modern feel.

Niiwam, a novella written by Senegalese film director and writer Ousmane Sembène, recounts the story of a poor man who attempts to carry his dead child undetected on a bus across Dakar to the cemetery on the outskirts of town. Translated from French, this poignant tale offers a cross-section of the diversity of city life and the complexity of the human condition. I recommend this novella because when I teach Niiwam in my “Death in Francophone Literature and Media” course, the themes, character development, and overall message resonate deeply with students.
*published as Niiwam and Taaw: Two Novellas

A Time Far Past

A Time Far Past, a historical epic novel, tells the story of a North Vietnamese farmer-turned-soldier's struggle to adjust to postwar society and his failure to find family happiness. The story spans the 1950s through the 1980s. My own language and cultural background is northern Vietnamese, and I came of age when this book was published in 1986, a critical year of economic and political reform throughout Vietnam after decades of war, poverty, and stifling ideological doctrines. The book was welcomed by millions of Vietnamese readers as a fresh breeze that encouraged critical examination of the new peacetime social reality and stimulated new thinking about the pursuit of individual happiness.

Mahmud Dowlatabadi's Missing Soluch, capably translated from Persian into English by Kamran Rastegar, is a stunningly lyrical and poignant account of the tragic effects of rapid modernization on a single mother, her family, and their rural community in Iran in the wake of her husband's mysterious disappearance.

Ponciá Vicêncio takes the reader to the memories and legacies of slavery in Brazil. This 2003 novel by the contemporary Afro-Brazilian writer Conceição Evaristo is full of symbology and mysticism. It presents the journey of a young Afro-Brazilian woman, Ponciá, in the search for her family's history, the history of oppression of her country, and hope.

Faiz Ahmed Faiz (1911 -1984) is among the most widely read 20th-century poets in North India and Pakistan. This book is a small selection of his poems in Urdu, accompanied by English translations by the American writer Agha Shahid Ali. Faiz's poetry encapsulates the language of resistance and rebellion against the islamo-capitalist military elites of post-independence Pakistan. His verses live on as the slogans of protest on the streets of Islamabad and New Delhi today.

His verses live on as the slogans of protest on the streets of Islamabad and New Delhi today.

Originally published as the trilogy Childhood, Youth, and Dependency, this memoir of Danish writer Tove Ditlevsen is now available in a single-volume paperback from Penguin Classics.  This 'autofiction' renders a young working-class woman growing up in Copenhagen in the 1930s with poetic ambitions, yet too poor to afford an education. Marriage is the only means to a room of her own. I recommend Ditlevsen’s work for its gritty irony and luminous realism, and for its compelling depiction of gender and socio-economic inequalities, partner relationships, and an opioid addiction — issues that speak to today’s readers.
*The first two parts are re-issues of translations by Tiina Nunnally; the third part is a new translation by Michael Favala Goldman.

In this novel by Margarita Khemlin (1960-2015) set in the Soviet Union in the decades after World War II, Maya Klotsvog — a Jewish woman born in 1930 — attempts to arrange and rearrange her complicated life involving a succession of husbands, difficult children, and an endless search for a comfortable place to live. Steeped in Soviet clichés, Maya's language and the way she thinks — rendered into English from Russian by the translator Lisa C. Hayden — keep her personal traumas and the historical traumas of Jews in the USSR both always exposed and never fully addressed. 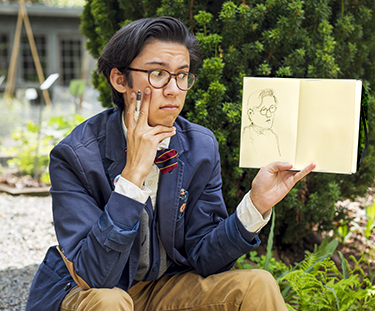 Through the study of dialects, Elijah Pasco has combined his love of linguistics and theater.

A Passion for Volleyball — and Classics

International student Maria Bogomolova came to the UW to play volleyball. Along the way she discovered a love of Classics.