Staying Home? Here's What to Watch

Staying home to help slow the spread of the coronavirus? Looking for ways to stay entertained? If you've already binged all the shows in your Netflix queue, fear not. Faculty in the UW Department of Cinema & Media Studies have gathered television and film recommendations to fit every mood.

If you want an escape...

Described by Variety as “a cross between a seat-of-your-pants heist movie and a protracted heart attack,” you won’t think about coronavirus once for 135 minutes. Be aware that it's brash, crass, and not family-friendly. Directed by Josh & Benny Safdie.
Rent on Amazon Prime Video, YouTube, GooglePlay, or Redbox.

If you want to watch a classic...

Now that you have the time, watch this 3.5 hour classic. Action, romance, comedy, and tragedy all in one!  Directed by Akira Kurosawa.
Streaming on Kanopy* and Hulu/LiveTV. Or rent on Amazon Prime Video, YouTube, GooglePlay, or Apple TV.

If you love a good conspiracy theory...

Perfect for the viewer who thinks COVID-19 is actually a giant conspiracy initiated by a clandestine government “black op” to prepare the way for an alien invasion and the eventual creation of an alien-human hybrid species.
Streaming on Hulu, or rent on Amazon Prime Video.

If you want a little silence…

An anthology of 17 newly restored silent films by pioneering women filmmakers, including Elsie Jane Wilson's "The Dream Lady" (1918), which offers a whimsical glimpse of cross-dressing that was so popular in that era, and "Caught in the Cabaret," a short featuring Charlie Chaplin in the first year of his screen appearances, directed by Mabel Normand, the era's Queen of Comedy. Other films explore birth control, abortion, prostitution, and other controversial issues.
Streaming on Netflix.

If you love the Pacific Northwest...

Twin Peaks is a genre masterpiece from David Lynch; Portlandia is a comedy sketch series from Sleater-Kinney alum Carrie Brownstein and Saturday Night Live alum Fred Armisen. Both explore the Pacific Northwest in all its strangeness and beauty, and both feature UW School of Drama alumnus Kyle MacLachlan.
Twin Peaks is streaming on Netflix, Hulu, Showtime, and CBS All Access, or rent on YouTube.
Portlandia is ​streaming on Netflix, or rent on Amazon Prime Video.

If you want a "social distancing" classic...

This documentary, which inspired a 2009 film of the same title, examines the life of mother and daughter “Big Edie” and “Little Edie” Beale, former socialites living together in isolation on their East Hampton estate.
Rent on Amazon Prime Video, YouTube, or GooglePlay.

If you wish you could travel abroad and see cute cats...

See Istanbul through the eyes of its most beloved citizens: cats! A cheering, family-friendly documentary by a female director. Directed by Ceyda Torun.
Rent on Amazon Prime Video, YouTube, and GooglePlay.

If you need a good reminder not to touch your face...

The pandemic classic! Directed by Steven Soderbergh.
Streaming on Cinemax, or rent on Amazon Prime Video.

* Kanopy is a free on-demand streaming platform for anyone with a university affiliation or public library membership. It offers thousands of films and documentaries, including 400+ Criterion titles. 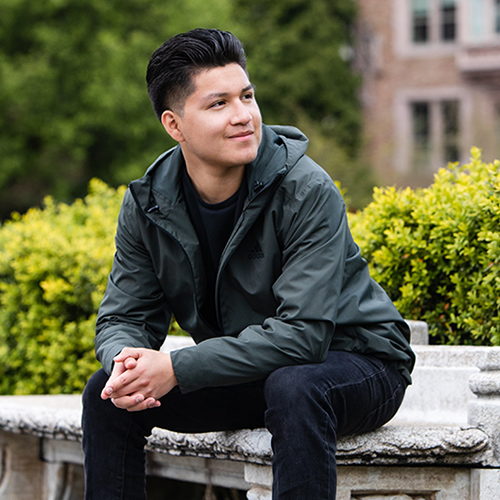 Will Sanchez (BA, Comparative History of Ideas, 2022) has developed connections to build on — with leaders in nonprofit, tech, and political circles.