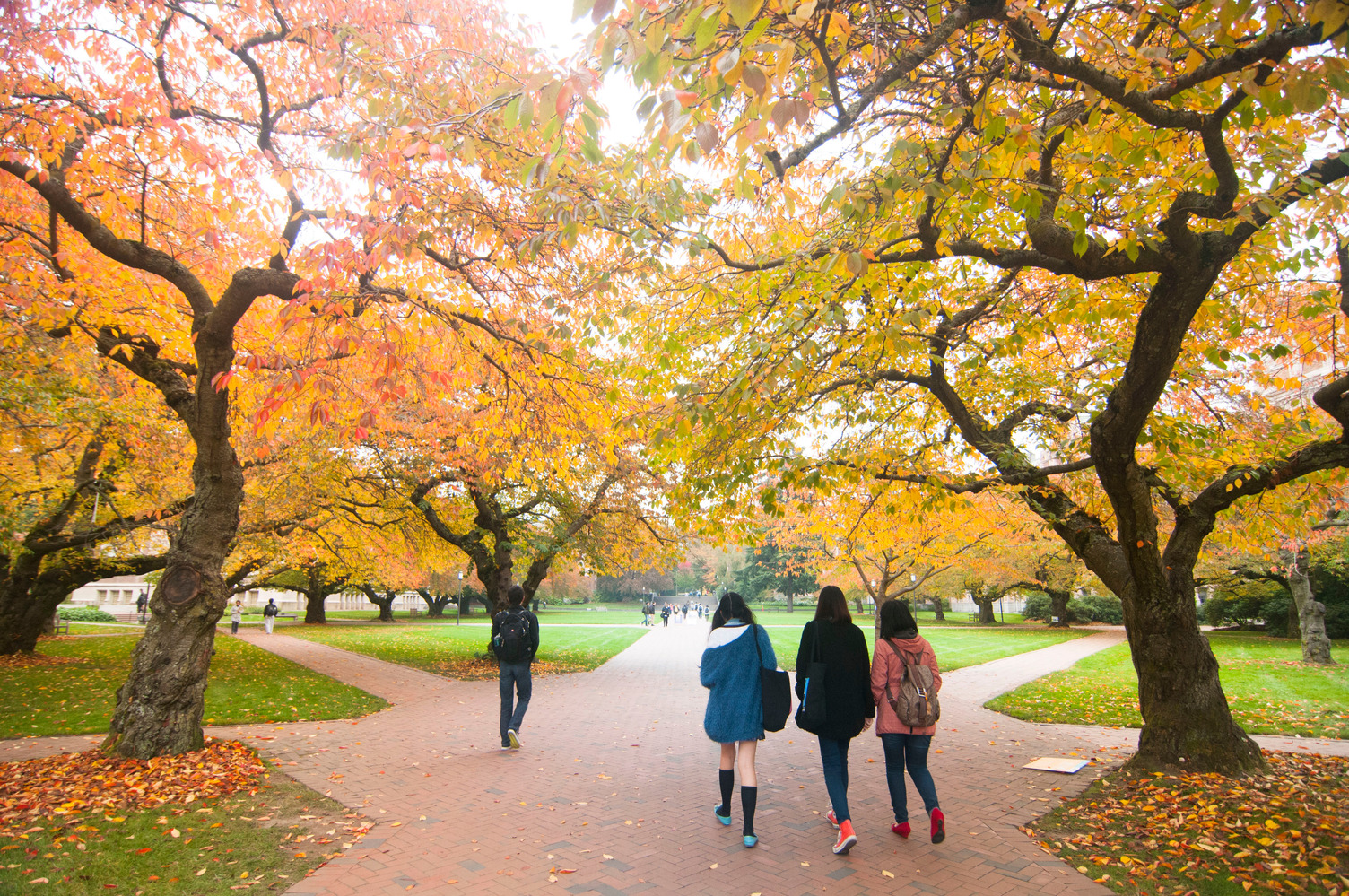 In honor of American Indian and Alaska Native Heritage Month, deepen your learning in American Indian studies, make connections on campus, and celebrate the work of the University of Washington Seattle's College of Arts & Sciences faculty, staff, students and alumni.

Thank you to College of Arts & Sciences faculty, staff, students, alumni and affiliates for contributing to this article.

*phrasing/descriptions in this article are pulled from the source documentation and may vary.

Community and Connection at the UW Seattle

CAISS's mission is to support American Indian, Alaska Native, and Indigenous students, faculty, staff, and communities through scholarship, research, teaching, learning, and mentorship that strengthens and builds relationships among the UW and Tribes, First Nations, and other Indigenous peoples.

CAISS's vision is to create a University of Washington that recognizes, values, and strengthens American Indian, Alaska Native, and other Indigenous intellectual traditions, communities, and futures.

wǝɫǝbʔaltxʷ – Intellectual House is a longhouse-style facility on the UW Seattle campus. It provides a multi-service learning and gathering space for American Indian and Alaska Native students, faculty and staff, as well as others from various cultures and communities to come together in a welcoming environment to share knowledge. For updates, follow the wǝɫǝbʔaltxʷ – Intellectual House on Facebook and Instagram.

The Kelly ECC is an inclusive and affirming space that cultivates a transformative student experience. The Center serves and empowers historically marginalized and underrepresented students by providing educational and cultural opportunities for holistic development. In addition, the ECC houses First Nations @ UW, an undergraduate intertribal registered student organization. First Nations @ UW hosts events both on- and off-campus with the intention of educating the community about Native cultures, spreading awareness to issues affecting the Native community and upholding their respective customs and traditions.

In October 2018, the Seattle Public Library hosted a roundtable titled “What is at stake for Washingon’s Native nations today (video - Seattle Channel). While the discussion covered a broad range of topics and issues four interrelated themes emerged: treaty rights, relationship building, environmental concerns and activism, and education. This article is a recap of the roundtable, edited for length and clarity.

Alongside twentieth- and twenty-first-century Native writers, artists, and intellectuals, Chadwick Allen examines the multiple ways Indigenous mounds continue to hold ancient knowledge and make new meaning—in the present and for the future. Clear and compelling, Earthworks Rising provokes greater understanding of the remarkable accomplishments of North America’s diverse mound-building cultures over thousands of years and brings attention to new earthworks rising in the twenty-first century.

Book: Therapeutic Nations: Healing in an Age of Indigenous Human Rights (The University of Arizona Press, 2013)

Therapeutic Nations is the first book to demonstrate affect and trauma’s wide-ranging historical origins in an Indigenous setting, offering insights into community healing programs. The author’s theoretical sophistication and original research make the book relevant across a range of disciplines as it challenges key concepts of American Indian and Indigenous studies.

by Christopher B. Teuton (Cherokee Nation), Professor and Chair of American Indian Studies and Hastings Shade, with Loretta Shade and Larry Shade, illustrated by MaryBeth Timothy

Ayetli gadogv—to "stand in the middle"—is at the heart of a Cherokee perspective of the natural world. From this stance, Cherokee Earth Dwellers offers a rich understanding of nature grounded in Cherokee creature names, oral traditional stories, and reflections of knowledge holders. During his lifetime, elder Hastings Shade created booklets with over six hundred Cherokee names for animals and plants. With this foundational collection at its center, and weaving together a chorus of voices, this book emerges from a deep and continuing collaboration between Christopher B. Teuton, Hastings Shade, Loretta Shade and others.

Book: A Drum in One Hand, a Sockeye in the Other, Stories of Indigenous Food Sovereignty from the Northwest Coast (University of Washington Press, 2022)

Charlotte Coté shares contemporary Nuu-chah-nulth practices of traditional food revitalization in the context of broader efforts to re-Indigenize contemporary diets on the Northwest Coast. Coté offers evocative stories of her Tseshaht community's and her own work to revitalize relationships to haʔum (traditional food) as a way to nurture health and wellness. As Indigenous peoples continue to face food insecurity due to ongoing inequality, environmental degradation, and the Westernization of traditional diets, Coté foregrounds healing and cultural sustenance via everyday enactments of food sovereignty: berry picking, salmon fishing, and building a community garden on reclaimed residential school grounds. This book is for everyone concerned about the major role food plays in physical, emotional and spiritual wellness.

Article: What does it mean to 're-Indigenize' contemporary diets? KUOW

Book: The Sea is My Country: The Maritime World of the Makahs (Yale Books, 2015)

Joshua L. Reid discovers that the “People of the Cape” were far more involved in shaping the maritime economy of the Pacific Northwest than has been understood. He examines Makah attitudes toward borders and boundaries, their efforts to exercise control over their waters and resources as Europeans and then Americans arrived, and their embrace of modern opportunities and technology to maintain autonomy and resist assimilation. The author also addresses current environmental debates relating to the tribe’s customary whaling and fishing rights and illuminates the efforts of the Makahs to regain control over marine space, preserve their marine-oriented identity, and articulate a traditional future.

From 2004 to 2006 the Osage Nation conducted a contentious governmental reform process in which sharply differing visions arose over the new government's goals, the Nation's own history, and what it means to be Osage. The primary debates were focused on biology, culture, natural resources and sovereignty. Osage anthropologist Jean Dennison documents the reform process in order to reveal the lasting effects of colonialism and to illuminate the possibilities for indigenous sovereignty. In doing so, she brings to light the many complexities of defining indigenous citizenship and governance in the twenty-first century.

by Christopher B. Teuton (Cherokee Nation),  Professor and Chair of American Indian Studies

Cherokee Stories of the Turtle Island Liars' Club paints a vivid, fascinating portrait of a community deeply grounded in tradition and dynamically engaged in the present. A collection of forty interwoven stories, conversations, and teachings about Western Cherokee life, beliefs, and the art of storytelling, the book orchestrates a multilayered conversation between a group of honored Cherokee elders, storytellers, and knowledge-keepers and the communities their stories touch. Collaborating with Hastings Shade, Sammy Still, Sequoyah Guess, and Woody Hansen, Cherokee scholar Christopher B. Teuton has assembled the first collection of traditional and contemporary Western Cherokee stories published in over forty years.

by Tyler Jimenez, UW Assistant Professor of Psychology, and Jamie Arndt, and Peter J. Helm of the University of Missouri

Research shows how discontinuing a Native American mascot can stoke racism among a team’s surrounding community.

In Reclaiming the Reservation, Alexandra Harmon delves into Quinault, Suquamish, and pan-tribal histories to illuminate the roots of Indians’ claim of regulatory power in their reserved homelands. She considers the promises and perils of relying on the US legal system to address the damage caused by colonial dispossession. She also shows how tribes have responded since 1978, seeking and often finding new ways to protect their interests and assert their sovereignty.

Lectures, Conferences and other Media

Join Owen Oliver (Quinault/Isleta Pueblo) (BA, American Indian Studies / Political Science, 2021) on a special virtual tour of the University of Washington campus through an Indigenous lens. The tour is based on Owen’s original publication and includes narration by Owen and photos and videos across 10-stops.

This symposium brings people together to share knowledge on topics such as traditional foods, plants and medicines; environmental and food justice; food sovereignty/security; health and wellness; and treaty rights. This event serves to foster dialogue and build collaborative networks as we, Native peoples, strive to sustain our cultural food practices and preserve our healthy relationships with the land, water, and all living things. 2023 date TBA.

The Department of American Indian Studies hosts an annual literary and storytelling series. Sacred Breath features Indigenous writers and storytellers sharing their craft at the beautiful wǝɫǝbʔaltxʷ Intellectual House. Storytelling offers a spiritual connection, a sharing of sacred breath. Literature, similarly, preserves human experience and ideals. Both forms are durable and transmit power that teaches us how to live. Both storytelling and reading aloud can impact audiences through the power of presence, allowing for the experience of the transfer of sacred breath as audiences are immersed in the experience of being inside stories and works of literature. 2023 date TBA.

Professor Sven D. Haakanson is a leader in the documentation, preservation, and revival of indigenous culture, including his own native Alaskan Sugpiaq traditions. He is a recipient of a MacArthur Fellowship (2007), the Museums Alaska Award for Excellence (2008), the ATALM Guardians of Culture and Lifeways Leadership Award (2012), and his work on the Angyaaq led it to be inducted into the Alaska Innovators Hall of Fame (2020). He was Executive Director of the Alutiiq Museum and Archaeological Repository (2000-2013 Kodiak, AK), and joined the University of Washington as an associate professor of Anthropology and curator of Native American collections at the Burke Museum in 2013. He played a central role in the design of the new Burke "Culture is Living" Gallery (2016-19). Dr. Haakanson engages communities in cultural revitalization using material reconstruction as a form of scholarship and teaching. With a Nordic-American background himself, Dr. Haakanson has long been interested in the intersection of communities, traditions and material cultures in Alaska and elsewhere.

Video: The Historical Roots of Indigenous Activism in the Era of Standing Rock - History Lecture Series

Burke Museum curator is a bridge to an ancient world, University of Washington Magazine

Sherri Berdine (Unangan - Aleut) is a graduate of the UW with bachelor’s degrees in Sociology and American Indian Studies, and she earned a Master of Jurisprudence in Indian Law from the University of Tulsa College of Law.

A Tlingit Leader in the Making, Perspectives

Tami Hohn (Puyallup), Assistant Teaching Professor in the Department of American Indian Studies, explains why preserving the language – and sharing it with students – has been a fulfilling personal journey.

Earning an undergraduate degree in American Indian Studies, Chenoa Henry (Tulalip) is an alumna of the University of Washington and also holds a Master of Public Administration degree from Seattle University.

I Climb Up the Ladder, Undergraduate Academic Affairs

The Language of the Land, University of Washington

UW Lecturer Tami Hohn (Puyallup) is bringing Southern Lushootseed to a new generation across the University and the Puget Sound — where the language has always lived.

‘Relationships Don’t have an End Goal: A Q&A with the Burke Museum’s Decolonization & DEAI Team, American Alliance of Museums

Please note, this is a sample of the large and diverse body of work relating to the field of American Indian studies at the University of Washington. If there is work that you would like to see in this article, please email us at uwartsci@uw.edu.

Explores the historical and cultural roots of powwow. Discusses the ways this indigenous Native art form has adapted since prehistoric times.

ENGL 559 A: Indigenous Literatures and Other Arts

This seminar will actively juxtapose works of alphabetic literature with works of visual and installation arts and with built environments produced by American Indian, Oceanic, and other Indigenous writers and artists.

AIS 480 A: Indigenous Resistance and Resurgence Movements in the United States, Canada, and Mexico (DIV / SSc)

Introduction to the cultures and governing structures of indigenous peoples of American Indian and First Nations tribal communities in the North, coastal British Columbia, and Pacific Northwest region as self-determining political actors in a contemporary multicultural and global region.

Community and mentorship made all the difference to Sherri Berdine (2008) as an Alaskan Native (Aleut & CIRI Descendent) UW student. Now she's the University's Director of Tribal Relations.