A Marriage of Art & Neuroscience

Students in a laboratory crowd around a classmate wearing an electroencephalography (EEG) cap. They watch as his brain activity is captured on an EEG machine while he listens to music.  Four more EEG machines are stored nearby, along with an electromyography (EMG) machine to measure muscle response, a galvanic skin response sensor, and a device that tracks eye movements.

Despite the high-tech tools, the lab’s sole purpose is artistic exploration. The Art and the Brain Lab was created two years ago in the Center for Digital Arts and Experimental Media (DXARTS) through the UW's Bergstrom Award for Art and Science, which supports faculty projects or activities that enhance the student experience and bridge the intersection between art and science. Chemistry alumnus Donald Bergstrom (BS, 1965) established the award in 2013.

“There are a lot of questions that are wide open with this neuroscience technology,” says James Coupe (PhD, DXARTS, 2009), associate professor of DXARTS. “It’s like the early days of photography or cinema, when people asked, ‘What are the possibilities of this camera? What would make sense to film?’ In the same way, we want to challenge ourselves and ask, ‘What is the language of neuroscience and what is its value to art? What can we do with this?”

DXARTS explores that question in a 400-level course, Art and the Brain, taught by an interdisciplinary team that includes Coupe, DXARTS director Juan Pampin, UW physiology and biophysics professor Eberhard Fetz, and Thomas Deuel, a practicing neurologist at Swedish Hospital. Both Fetz and Deuel have an interest in art; Deuel studied jazz composition and performance at the New England Conservatory while completing an MD/PhD in neurobiology.

It’s the brave new world of developing not just new media for art, but a new vocabulary.

It was Fetz who first reached out to DXARTS about collaborating. He admired how Sanctum, a public art project that Coupe and Pampin created for the façade of the Henry Art Gallery, melded art and technology. He wondered whether a similar melding might be possible with art and neuroscience. Discussions with Coupe led to the Art and the Brain course in 2013.

The first year of the course, the lab had not yet been established. Students learned the basic concepts and tools of neuroscience, then developed proposals for an art project that would incorporate the technology in a meaningful way. “The proposals were all speculative,” says Coupe. “We tried to rein them in based on what was possible according to the neuroscientists in the room, but artists can get pretty carried away.” In subsequent years, students have been able to realize their ideas in the Art and the Brain Lab — or at least explore what’s actually possible.

Throughout the quarter, the neuroscience experts talk about brain science and various devices that measure neural activity. The students then use the devices in the lab to complete four assignments, leading to a more ambitious final project. Coupe and Pampin provide guidance and critiques throughout to ensure that the technology never overshadows artistic intention.

“I think it’s easy to fall into the trap of just showing what this technology can do rather than doing something really interesting with it,” says DXARTS graduate student Dan Peterson, who took the course in 2016. “I try to stay away from having the artwork be about the technology.”

Peterson and fellow DXARTS graduate student Adam Hogan collaborated on a final project that reflects their backgrounds in sound and filmmaking respectively.  Using Peterson’s existing field recordings and Hogan’s existing film footage, they “edited” each other’s work through their neural responses to it. The students, hooked up to EEG machines, were positioned to experience each other’s work but not their own. As Hogan listened to the sound recordings, any sound that caused a spike in his brain activity prompted the film footage that Peterson was watching to jump to a different section. Conversely, when that film footage caused a spike in Peterson’s brain activity, the sound recording would change.  “With the back and forth, we made this kind of feedback loop and tried to see where it would take us,” says Peterson.

Though the course has ended, Peterson and Hogan are continuing with their project. Neuroscience is essential to it, yet both artists feel that the work remains true to their long-standing creative interests. “For me, it’s just another way to approach non-narrative filmmaking, which is what I’m interested in,” says Hogan. “Every time a new piece of technology is introduced, what’s interesting is how to incorporate that tool within your existing practice.”

What about students who don’t have an existing art practice? Classmate Rachel Townsend, a museology graduate student, is not an artist. She took the course to explore how art affects the brain. For her final project, Townsend had subjects view nine famous artworks for one minute each as she gathered data about their viewing patterns using an eye movement tracker. She then explored ways to share those viewing patterns through video — illuminating an artwork with points of light for each detail viewed, for example. “The class changed the way I thought about how an artist might gain inspiration from the ways our bodies function,” says Townsend. “It also helped me think about the unique challenges museums face when working with digital artists.”

While the Art and the Brain course is open to all UW students, it is required for DXARTS PhD students, reflecting DXARTS’s emphasis on experimental media and taking risks. “We want our students to be familiar with these tools,” says Pampin, “and we believe that the discussions that come up in the course, the thinking about things in a different way, is quite important for them.”

The course and lab have stretched the faculty as well. “As a teacher and artist, I feel like I’m also a student in the class, because there’s so much that nobody knows,” says Coupe. “There’s no way to look this stuff up. It’s the brave new world of developing not just new media for art, but a new vocabulary. That’s what's interesting about it.” 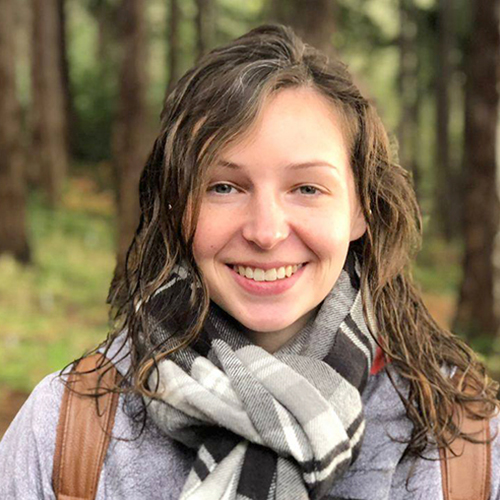 Industrial design professor Jason O. Germany was part of a team that designed a low-cost ventilator on short notice during the pandemic.