Dianne Harris, dean of the College of Arts and Sciences, announced that Andrea Woody will become the next Divisional Dean of the Social Sciences, effective July 1. Woody has served as a faculty member at the UW since 1998 and currently serves as the Chair of the Department of Philosophy.

“Dr. Woody brings extensive experience from her years at the UW as a scholar, teacher and Department Chair in the Social Sciences,” said Harris. “I’m delighted to welcome her as Divisional Dean.”

In addition to her appointment in the Department of Philosophy, Woody is also adjunct faculty in the departments of Dance; Gender, Women & Sexuality Studies; and History. Her research has focused primarily on the social and formal aspects of scientific explanation, modeling, and representation, with special interest in diagrammatic, graphical, and pictorial representations. She has collaborated with scientists to explore automated search techniques and the application of optimal control theory in quantum domains, molecular chemistry, and biology, and worked with an international network of philosophers to explore the value of philosophy of science in science education. Much of her research has focused on issues in chemistry, and she is editor of the Philosophy of Chemistry volume for the Handbooks in Philosophy of Science series (Elsevier, 2011). Woody also has an abiding interest in the performing arts, especially philosophical issues related to the identity of performing artworks and the virtues of live performance.

“I look forward to learning more about every unit in the Social Sciences and working in close partnership with chairs and directors to support excellence in the research, teaching, and public missions of their units,” said Woody. “I am excited, and honored, to serve UW in this new role working with Dean Harris and our colleagues in the Dean’s Office.”

As Woody becomes Divisional Dean, Sara Goering, professor of philosophy, will step in as the new interim chair of the Department of Philosophy. A faculty member at UW since 2003, Goering is part of the Core Faculty for the Program on Ethics and the Disability Studies Program.

Woody succeeds George Lovell, who has led the Division of the Social Sciences for the past five years. “Lovell has moved the division forward in numerous and important ways, including supporting the hiring of many new faculty members across the division,” said Harris. “He has been a tireless advocate for the division and its diverse array of departments, centers, institutes and programs.” Lovell has also represented the College through service on several UW-wide committees and task forces, including the Title IX Advisory Group. 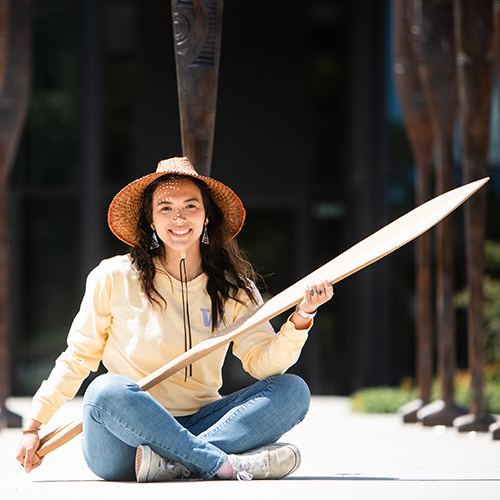 A Tlingit Leader in the Making

Her exploration at the UW has led Stephanie Masterman (BA, American Indian Studies; Arctic Studies minor; 2022) to leadership roles in her tribal community.