Digging into the Roots of Rap

Students in the course “Roots & Routes of Rap” have sung drum patterns with an African drummer from Guinea. Sung African American spirituals with the director of a gospel choir. Penned lyrics and set down beats with a local rap musician and DJ. Hands-on experiences are at the heart of the course, offered by the UW School of Music (SoM) for the first time this quarter.

As the course title suggests, the class explores rap music and the musical genres that have contributed to its development. SoM professor Christina Sunardi created the course with support from the Andrew W. Mellon Foundation through its Arts and Creativity Initiative. The initiative aims to spark creativity in students, particularly those who may not be majoring in the arts.

“The idea of the grant was to develop lower-division courses geared towards all students, so that no UW student would go through four years at the University without an opportunity to explore their creativity,” says Sunardi, associate professor of ethnomusicology, chair of the Department of Dance, and Adelaide D. Currie Cole Endowed Professor.

For years, Sunardi has taught courses on a variety of forms of music, often including rap music and its musical influences. She never considered dedicating an entire course to rap — she’s not an expert on the genre — but when Mellon funding meant she could bring in knowledgeable guest artists, she saw an opportunity.

“Knowing that I could bring in experts to talk to the students gave me the confidence to offer the class,” says Sunardi. “Having the funds to bring in guests was huge.”

Students in the class represent a wide range of UW majors, including anthropology, communication, business administration, engineering, informatics, and more. Some are longtime fans of rap music; others signed up after taking another course with Sunardi, or to fulfill a graduation requirement in the arts. Sunardi envisioned the students interacting with guest artists in person, but COVID dashed those plans. Guests have been visiting online instead, with active participation still central to the experience.

“What I’m trying to do is situate rap music very deeply in African American culture and music,” says Sunardi, who provides background information in weekly class sessions. “The class starts with the music that enslaved people brought with them from Africa and established here. Then we look at spirituals — the importance of call and response, polyrhythm, musical density, body motion, and other characteristics also seen in rap music.”

There are so many layers to rap music. ...The more I learn, the more fascinated I become.

Other influences include jazz, blues, and funk. Sunardi finds that blues in particular has striking similarities to rap in terms of its provocative content.

“Blues musicians in the 1920s and 1930s spoke about things that some in ‘polite society’ at the time thought were inappropriate to talk about,” says Sunardi. “They talked about sex and drugs and run-ins with the law and protest. People in the middle and upper class, including those in the Black middle and upper class, looked down on the blues as being ‘the devil’s music,’ just as rap is sometimes controversial because of its lyrics and the lifestyles — or perceived lifestyles — of the artists.”

Wrapping up with Rap

After exploring rap’s musical influences, the course dives into rap music itself, with Seattle rap artist Asun (Suntonio Bandanaz) and DJ Neebor (Robin Neebor Clemente), a local DJ, each visiting the class. In addition to weekly assignments, students have begun working on a final project: writing a rap song, which they will present to the class at the end of the quarter.

For his visit, Asun offered strategies for writing lyrics. DJ Neebor taught students how to make beats using Abelton Live, a software that students can download for a 90-day free trial. He will soon return to discuss the students’ beats. Dani Tirrell, who teaches street and club-style dance in the Department of Dance, will discuss rap and hip hop culture more broadly from a dancer’s perspective.

In her class sessions, Sunardi explores other aspects of rap, such as the politics of sampling, the emergence of Gangsta rap, and issues of race and gender in rap — including the work of female and non-African American rappers. She also plans to address the thorny topic of rap lyrics that may be perceived as misogynistic, anti-gay, or otherwise off-putting to certain audiences. In fact, her course syllabus includes a trigger warning for students who may be sensitive to lyrics found in some rap music.

“We’ll discuss what scholars are saying about this and also what people in the community are saying to each other,” says Sunardi. “I certainly have my own opinions and my own reactions, but I do want to allow space for us to discuss these issues from different perspectives.”

Sunardi believes there’s much to be celebrated in rap music, and she is thrilled to have this opportunity to learn more along with her students.

“There are so many layers to rap music,” she says. “It can be profound, beautiful, amazing poetry. The play with words, the construction of the line, the rhymes, the references to other things, the beats — it’s all so creative. There is sampling of older genres and older songs, bringing the messages of those songs into the present, which adds a whole other layer of meaning. The more I learn, the more fascinated I become.”

Community and mentorship made all the difference to Sherri Berdine (2008) as an Alaskan Native (Aleut & CIRI Descendent) UW student. Now she's the University's Director of Tribal Relations. 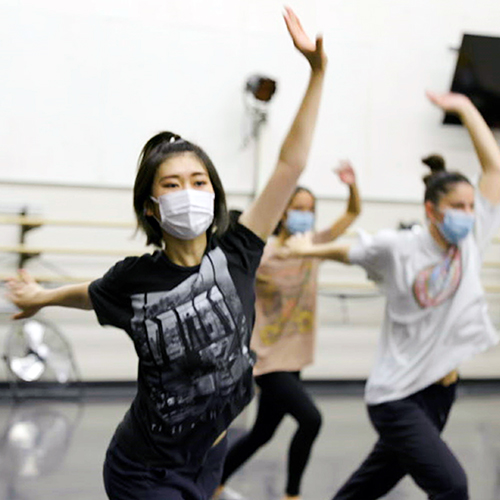 A Dance Residency, Worth the Wait

During choreographer Ronald Brown's residency in the Department of Dance,  undergrads gained confidence while learning one of his high-energy dances.